New figures revealed by the Labour Party suggest that 83,997 over-75s living with dementia in the South East could lose their free TV licence next year.

As part of the BBC charter renewal process the Conservatives forced the BBC to take on the cost of free TV licences and therefore as of next year, only those in receipt of Pension Credit will receive a free TV licence, meaning that 3.7 million older people will lose out across the country.

Just 19% of over 75s are currently in receipt of pension credit, meaning 81% of all over 75s are likely to lose their TV licence.

Free TV licences are an important benefit for older people who suffer disproportionately from loneliness and social isolation. Four in ten older people say the television is their main source of company.

Those no longer eligible for free TV licences will need to apply and pay for a TV licence, and could be criminalised for failing to do so.

Applying for a TV licence could be a challenge for many older people, particularly for those living with dementia.

“I’m horrified by the news of Conservative plans to strip older people of their free TV licenses. Television, for many older people, does not just provide entertainment but comfort and companionship. Older people often struggle with isolation; this can worsen conditions such as dementia. This plan belies a disregard for the concerns of older people and betrays a callousness toward those who have worked and contributed to this country throughout their lives. I am calling for an immediate halt to this policy.”

Estimates provided by the House of Commons Library are below:

From this Labour has made the estimates included in the below table of how many over 75s suffering from dementia in each region will lose their free TV licence. 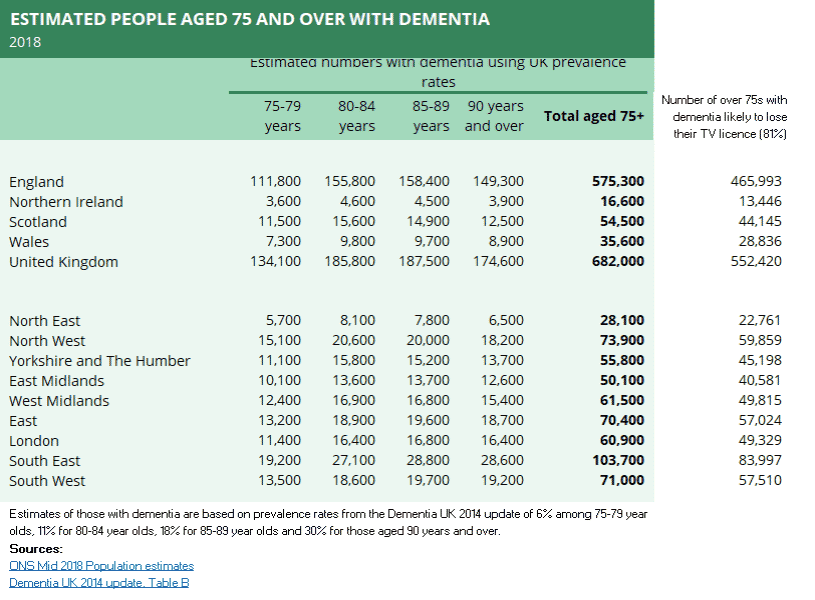