Rosie attended a parliamentary event bringing together people living with mental health problems from Canterbury and surrounding areas, representatives from Mind and other parliamentarians to discuss mental health services.

The event – ‘Mental Health: Raising the Bar’ – was organised by national mental health charity Mind and took place on 13 September in the House of Commons, with the aim of promoting conversations between people with mental health problems, local authorities responsible for providing services and policymakers.

Rosie, MP for Canterbury listened to the experiences of people affected by poor mental health and showed her commitment to ‘raising the bar’ for mental health services in the area by putting her name to a pledge board.

Rosie said: “I was glad to attend this important event and intrigued to hear from people affected by poor mental health. Around 1 in 4 people in Canterbury and Whitstable will experience a mental health problem in any given year, but unfortunately, I regularly hear from many constituents who tell me they’re not getting the support they need. I’m committed to doing all I can to transform mental health services so that everyone in my area gets the information, advice and treatment they need and deserve, when they need it. It’s so vital that we collectively ‘raise the bar’ for mental health services across our area.”

Paul Farmer, Chief Executive of Mind, said: “Mental health problems can affect anyone, no matter what their background. All main political parties have recognised the scale of the problem, but after decades of neglect and underfunding there’s still a great deal of unmet need. Every day we hear from people struggling to access the support they need.

“We are really pleased that Rosie Duffield took the time to listen to people’s first-hand experiences as well as find out more about some of the work our local Minds do to support people in Canterbury. By participating in this event, we hope that MPs recognise the importance of mental health and the vital role they play in ensuring that those of us living with mental health problems in Canterbury and Whitstable get the services and support they need to recover, stay well and lead fulfilling lives.”

For more information about Mind, check out their website: www.mind.org.uk or call their confidential information line on 0300 123 3393

Woolage Green, part of the Womenswold Parish, is an idyllic place in many ways. There are lovely houses, fields of wheat growing in the August sun and a charming country pub to serve the community. New MP Rosie Duffield paid Woolage Green a visit on Friday however, for an altogether different reason. With waiting times for A&E in east Kent now the worst in the country, Woolage Green a 37-minute drive from either QEQM in Margate or William Harvey in Ashford could be the worst place in the whole of the United Kingdom to live for A&E provision.

Seasalter, near Whitstable, is also a long way away from A&E facilities; residents living near that part of the coast have an average 36-minute commute (given a clear drive) to the nearest Accident and Emergency department. Of course, when they finally do get there, they will only be met with a very, very long wait. The Tories might have forgotten Woolage Green, Seasalter and other nearby villages and communities, but Rosie hasn’t.

Rosie is horrified at the new report that just 61% of patients in east Kent are seen in A&E within 4-hours; she has heard reports of people waiting for up to 8 hours to be seen. Those figures are a testament to the crisis besetting the NHS in this part of the country. Rosie was equally disgusted that the neighbouring MP for Ashford, Damian Green, seems to dismiss the problem in this area. Rosie is concerned at Mr. Green’s dismissal in early August that the NHS in east Kent isn’t as ‘bad as it is in some places’. It seems to Rosie that our waiting times ARE the worst, our residents ARE concerned and she will shout loudly for the Tory government to put the much-needed funding into our dying NHS.

The closure of the Urgent Care Centre at the Kent & Canterbury hospital earlier this year has been a disaster. Rosie wants both urgent care provision AND an Accident and Emergency department back in Canterbury. She is in discussions with NHS chiefs and is also putting pressure on the city council to offer full support and back her calls for these services to be returned.

Rosie is adamant that the people of Woolage Green, Seasalter and the wider Canterbury constituency should not have their lives endangered by Conservative cost-cutting measures; the crumbling facilities and overworked staff at our hospitals need the help of a Labour government; Rosie is that Labour voice in Kent and she is shouting loudly. 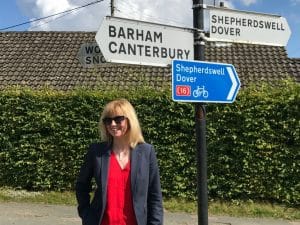